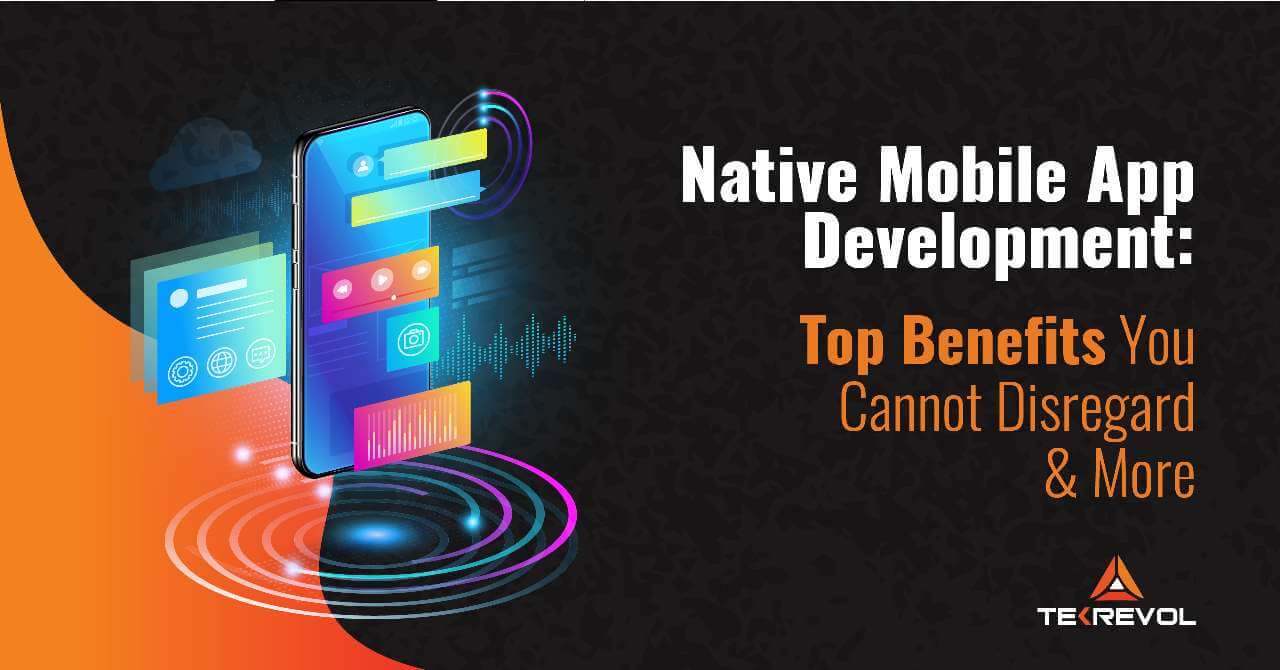 The majority of the world’s population now has access to smartphones and mobile apps, but they least care about which technology is used in developing these apps. They are more concerned about how the app can add value to their lives.

They care about is the app’s performance and responsiveness during use. Users also often get intrigued by the feature set of a mobile app.

When it comes to analyzing the performance and responsiveness of the application, the technologies used to build these apps play a critical role.

For mobile apps, these technologies can be categorized into native and cross-platform development technologies.

Native mobile app development technologies are more mature and have certain advantages and benefits and a few downsides as well.

Today, we will explore them and find out how your business can leverage these to take the lead.

What Is Native App Development?

The native apps are built employing the techniques and programming languages specific to the platform.

For example, if you want to build an iOS app, you can use Swift and Objective C, and for an Android app, you have Kotlin and Java.

Native technologies provide more control over the UI/UX of the app, hence making them more desirable when it comes to crafting exquisite mobile applications.

There are a number of other native app development features as well that often make these the first choice when thinking of building a mobile app.

There are main native app development platforms in the market. These include Android and iOS, which have their own characteristics. (More on these later)

So now that you know about native platforms and native apps, let’s walk through the benefits of the technology and how it can come in handy for your business.

There are several advantages of native mobile apps. Let’s skim through some of the most significant ones and understand what makes native app development different (and better). 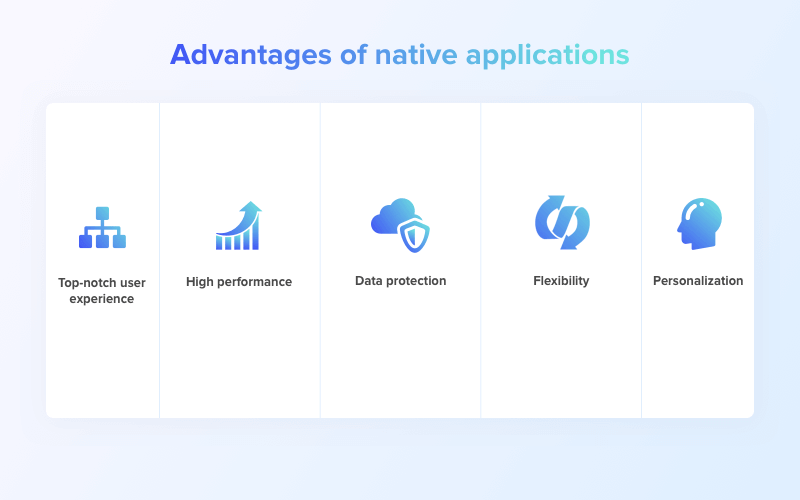 The Android and iOS platforms are famous and have wide usage around the world. They have vast acceptability around the globe.

This makes it easier to find the right talent to build such apps.

If you dive even deeper and look for Android & iOS developers, you will notice that hire Android developers are easier to find.

This is because Android is an open-source and the most used operating system with more options for developers.

Still, there are plenty of expert developers who can build beautiful and highly functional iOS apps as well.

So, whether you need to build a native Android app or a native iOS app, you can pretty conveniently find the right resources.

When building native mobile apps, it is comparatively easier to fix bugs and errors.

Let me tell you why.

For example, if you are developing a cross-platform mobile application, you face much more difficulty in managing bugs and fixing issues than on native platforms.

This is because you have to keep in mind the interface and performance on multiple platforms.

But this doesn’t happen with native app development.

Native technologies provide more control to the developers. Moreover, the tools, techniques, and maturity of native platforms make it convenient to fix any issues that arise.

No matter if you choose iOS or Android, the inherent architecture makes it rather easy to add more features.

The tools and the resources management options allow for more flexibility in the native apps.

Although it depends on the quality of code, the native platforms are generally more welcoming when you have to add new features.

Functionalities are the backbone of any app.

The same is the case with any native application development process. Native technologies and platforms usually offer more functionalities and control than others.

The options you can build with these are numerous, and the native architecture makes it easy to build a great, functional app.

When it comes to technical support, there is no comparison. Native apps have existed for more than a decade, and there is a significant online support that you can get.

Moreover, when a native application is published online, it gets better support and usually ranks higher.

This is because of the performance and set of features in the application.

Both native platforms have different requirements. These demands change with UI/UX depending upon the set of features required.

In today’s mobile applications, user experience is a significant factor that helps in attracting and retaining users.

When using native development technologies, it becomes easier to implement an efficient and platform-specific user interface.

There are a number of features that are implemented differently on both platforms, depending upon requirements. Experience is one of them. The superior implementation of the UI/UX makes the app’s performance even better, which makes the app more enjoyable for the users.

Nothing in the world is perfect. Everything around us has some advantages and disadvantages, so do native mobile apps.

Most businesses that create their mobile apps would want to cover both Android and iOS.

But with native mobile app development, you can build only one app at once. Native technologies allow building platform-specific apps, unlike cross-platform technologies that allow you to build for multiple platforms.

This creates a few disadvantages for the app owners and strategists. Let’s walk through some of the disadvantages of native app development. 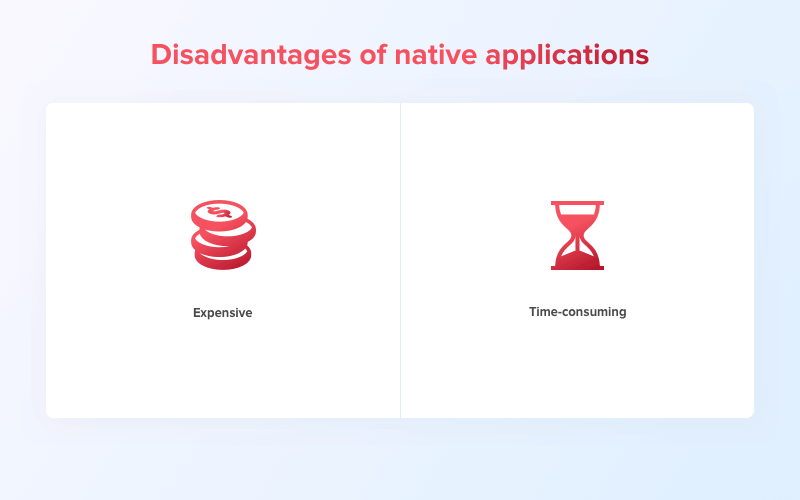 When you choose native application development and have to build apps for multiple platforms, it is clear that you would need more time to build.

Or even if you get both the apps built parallel, the number of development hours would still be more.

For example, if you choose to build a single feature, you would have to build it separately for each platform, i.e., iOS and Android.

What has been made for one platform cannot be automatically duplicated for the other platform using native technologies and hence requires extra time to build.

Another disadvantage of these technologies is that you need not only extra time but also require separate developers or developer teams for native mobile development.

For separate versions, you would need separate resources to build the apps for respective platforms.

For each type of development job, you would have to employ individuals with different skillsets.

This way, you can develop both versions of the application.

Apart from time and resources, one other tangent that gets affected is the cost.

When you choose native mobile application development for your mobile app project, building a separate version increases the cost.

Although the performance and other factors are top-notch, the rise in the cost becomes unavoidable. The increase in the cost of development is among the biggest advantages.

There are two popular native mobile platforms in the world, and almost everyone knows about them. These are known as iOS and Android.

These platforms have the majority of the world’s mobile traffic, and the most number of applications are built and run on these platforms.

Yet, if you are not aware of them, let’s have a brief look at them and their key characteristics.

Android is the most used operating system or mobile app platform around the globe. Android is an open-source platform, which means users get more control over the customization of the software and its looks and functions.

It can be tweaked by anyone as per the requirements.

Android is associated with Google, and all the Android apps are published on Google Play Store.

The Android audience is bigger in number.

iOS is the second most used mobile app platform or operating system. iOS is a closed operating system, meaning only Apple has the accessibility to control which devices the software can be installed on.

Moreover, the looks and functionalities of the iOS software can be managed only by Apple.

iOS apps are published on Apple Play Store, and only Apple users can download and install them.

Apple’s audience tends to spend more money, even though they are a smaller audience compared to Android.

When you are looking to build a native mobile app, there are a few requirements that you must keep in consideration.

Building a mobile application for your business is not a walk in the park, and that is why you need to proceed carefully to make it successful.

Let’s briefly have a look at some of the most important aspects.

Each new app being built is different, and that is why you need to consider those differences. The build-release cycle of an app depends on multiple factors.

If it is a minimal application, it can be built once and released.

However, for feature-rich applications, there have to be continuous build-release cycles. With modern requirements and platform changes, newer versions of the app need to be built and released in the form of updates on a regular basis.

Here are some other considerations you need to have a look at:

User privacy is among the rising concerns; that is why app publishing platforms have started to review mobile apps for various privacy parameters.

The data your application collects, the third-party requests you make, and everything else in the application raise a new flag. You have to be careful when building an application.

Compliance with modern policies and understanding the users’ concerns are among the few factors that you must not neglect.

There are some key differences in the interface of mobile Android and iOS.

For example, the location of choice list menus, the placement of navigation bars, the popups, and more.

Consistency in the interface for each native app is important. That is why, even when there is the freedom to design the app, uniformity in the design is required.

The increased use of technology has made itself vulnerable. But to counter that, there are now measures that you can take to make your native mobile applications more secure.

Security, in today’s times, is a common concern. If you are developing an app, you have to ensure that all the data being transferred or collected is channeled safely.

Apart from securing the data, the app or the system itself has to be safeguarded against modern bots and other kinds of attacks.

An experienced native app development team understands what pain points need to be touched when building such an application.

Building an application in the modern era is not only a business proposition. It is a leap where you have to take advanced measures to guard the data and protect your users from contemporary harm.

It can immensely benefit the app owners and organizations in ameliorating the app’s overall experience, multiplying the revenue, and building or improving the brand’s presence or reputation.

A perfectly built native mobile app can easily allow a business to grow beyond limits and accomplish past expectations.

For that, you need to ensure you hire the best native and flutter development company or team to build the application.

That is why you must leave the job to the professionals and just oversee the overall process. Let the experts at Tekrevol handle technical complications and build you an amazing native application.