Developing a mobile app is no child’s play and requires a well-thought-out plan of action to execute. Even the tiniest mistake in your process could turn out fatal for your app’s performance and success. When developing a mobile app, app developers usually ask questions like, “what you need, why you need, and who your target app users are?”

These question shouldn’t be taken lightly, because only a fraction of the existing apps at play store and app store reach the one million download benchmark.

So the next big question that comes to the mind of app developers is why most mobile apps don’t succeed in the market?

The biggest achievement a person could think of is when they see their app idea and dreams turn into reality and has become possible through the mobile app development industry.

Almost daily, you’ll say a dream transform into reality, through an app, but unfortunately, not many dreams get their chance to stand in the spotlight, most of them are soon left to rot after being neglected in the play store and app store.

Therefore, the sole purpose of this article will be to highlight all the red areas that no developer should wander into while developing a mobile application. This won’t just help you in the development process; it will also help your idea to become the featured app in the play/app store that’ll make it go viral and top the charts.

The most challenging thing for a developer is probably getting a high level of user retention and mobile application. 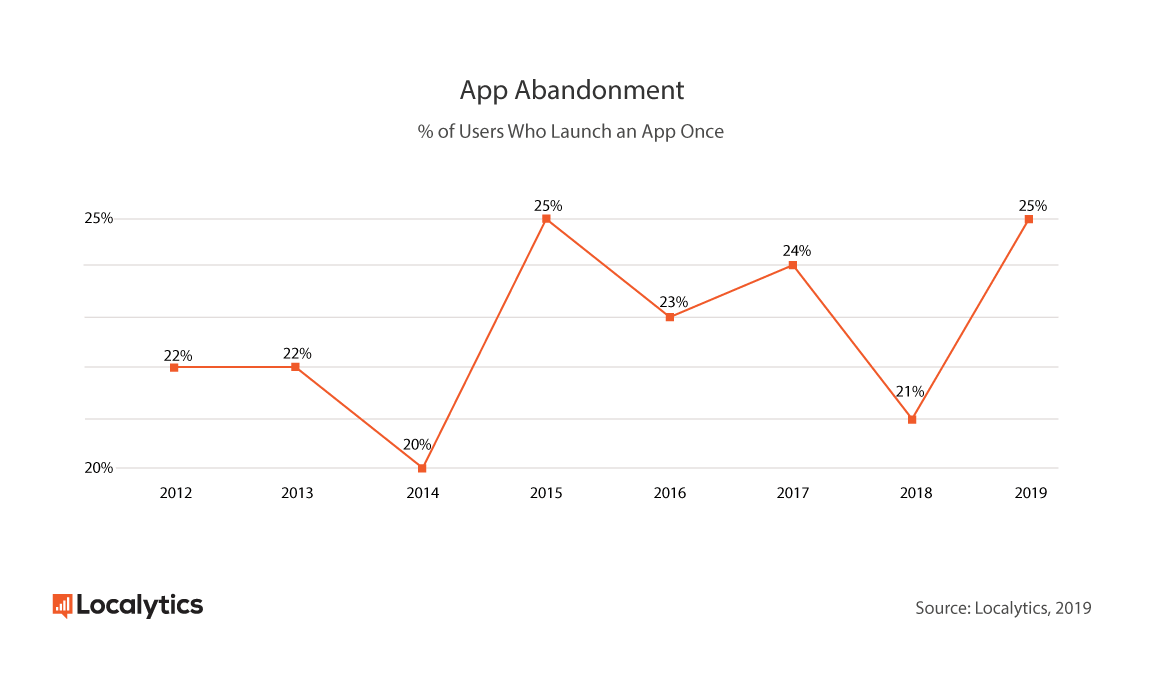 The charts are pretty disappointing when it comes to application abandonment; almost 25% of the users never return to the application they’ve used and didn’t find appealing enough. I agree that the numbers can leave many app developers and app enthusiasts heart-broken, but it is the truth, it’s a dog eat dog world in the app industry. It’s pretty much like Darwin’s theory of Evolution: “If you don’t succeed, you become extinct.” Your app’s fate rests in the hands of the user, and it’ll be decided in a matter of seconds. Therefore, I’d advise you to be cautious and avoid mistakes in the application development process.

So, what are the common mistakes that mobile app developers make while designing and developing a mobile application?

And, as a bonus, I won’t just be pointing out mistakes and pitfalls to avoid, I’ll also be explaining how to avoid them.

1. Which platform to go with? iOS or Android?

This is probably the one question you must’ve heard at least once in your life. And to answer this question, you need a full analysis of both platforms. According to stats, iOS has a stronghold in the US, but if in terms of global domination, Android has taken the reins.

Now, it comes down to you, if you intend to launch your mobile apps in multiple countries, then you should consider going with Android app rather than iOS, but if your application is based primarily with the US market, then you should consider iOS. Before choosing a platform, do make sure that you have researched all the options and other possibilities. Even if you miss out on the smallest of detail, then you’d be at risk of losing many potential customers.

2. Which development method to go with?

The next thing to consider when developing a mobile application is to understand the development method. There are two ways of creating an app, either you can have a native app, this will solely work on its dedicated platform, either iOS or Android, but there is another way, and that is cross-platform development.

If you plan on sticking with Native app development, then be prepared to give out a couple of pretty pennies because the development process for native apps is expensive. But, the cost is justified because of superior user interface. But if you want your app made quickly, and on a budget, then I’d suggest you should go with cross-platform app development. It doesn’t only make the development process quick; it also ensures the best overall experience on all platforms.

The excitement to launch your app is like none other that’s why many developers prematurely release their app without the correct due testing and diligence. And if you ask me, this is like playing with fire. In the beginning, you may feel that your app is working perfectly, but it’s only a matter of time before serious flaw surfaces which is usually followed with a bad review. And once your app is flagged with a bad review, the odds of being it successful become very slim. Therefore, quality management and testing are probably the most crucial steps in the app development process.

If you want to know about app testing and maintenance, the give this article a read.

There is only one way to ensure that your mobile app is flawless and that is by rigorous beta testing, and the sooner you start the testing and onboarding process, the better. At times, even the most meticulous testing of your mobile app could turn out to be insufficient. Therefore, you can have the testing and quality assurance done outsourced.

“Why do I need someone to test my mobile app when I can do this alone?”

Yes, you can surely do your app’s testing yourself, but quality assurance service providers like ourselves have a dedicated team of professional testers whose sole purpose is to make sure that your app is working flawlessly. In addition to the detection of bugs and crashes, we also offer significant ideas, like assisting your in-app purchases that’ll add extra value to your mobile app. The more people that test your app, the closer it will be to perfection.

4. Is Too Many Additional Features a Good Thing?

Who doesn’t like a few good features on their app, but you can overkill it with too many of them and this probably is the most common mistake that developers make. They bombard their app with too many features which makes the user run away within a few seconds. This problem can be avoided if developers had a pre-defined scope before entering the development process.

Without a scope, the features will start coming in thick and fast. And very soon your app will be overflowing with features that’ll make your screens never-ending and user experience devastating.

Why not to incorporate too many features in your app?

Using too many features can also backfire if your users aren’t using the latest technology. It can make your app sluggish and even unresponsive on outdated tablets and mobile devices that’ll eventually make your app crash. Thus, severely affecting your user experience.

Every mobile user is looking for a fast experience that is convenient and simple. And the key to achieve that is to don’t over-complicate things, this also helps in the app store optimization and marketing. Your primary focus should be on the core functions and services that can really satisfy the user’s need of coming to your app in the first place. If you have time to spare then use it to improve the user’s loyalty by working on your core features instead of adding more features.

5. Does the user experience count?

When basic requirements aren’t met, rejection becomes inevitable! Therefore, your app should be intuitive, easy to use, and unique if it wants to compete because these features are naturally evaluated by users in the very first few glimpses.

The first thing that users will evaluate in your app is its speed. You should make sure that users can perform multiple tasks in over a minute. If they aren’t able to do that, then there are high chances that they’ll ditch your app for good.

The next criterion they look for is a quick signup process. If users have to struggle at the initial login stage then it is likely they won’t stay on your app for long. It’s like the first impression when you meet someone new, if you find difficulty in the initial introduction, then you won’t probably ever speak to that person ever again.

What are the most common mistakes mobile app developers make when they launch your first mobile app?

The most common mistake developers make is they bombard their app with extra features which confuse users. This will have an adverse impact on user experience, and the chances are your app will be abandoned

How can you avoid these common mistakes?

These common mistakes can easily be avoided by devising a strategy and working on it. When you plan everything in advance, there are fewer chances of you making any mistakes

What are the biggest technical challenges faced by mobile app developers?

The biggest technical challenge app developer’s face is incorporating designs in the app that isn’t native to its platform. To solve this problem, designers and developers need to be on the same page, so that only such designs are made which can easily be implemented into the app’s codebase.

What additional security features would we need to include for mobile?

There are many additional security features that can be incorporated in a mobile app like encrypting data, even if the data is stolen by hackers, it won’t be any good to them. It is advised that developers use authorized API for optimum security. And lastly, developers should use good protocols for encryption such as AES and SHA256 and never store your keys on local devices. Use the latest and trusted encryption methods.

If you want to develop a successful mobile application that’ll top the charts, then it is crucial for you to start planning at the very beginning and determine what you need? Why you need it? And who your users will be? All these questions must have a definite answer before you dive in the development process. Making mistakes is a part of the natural process, but it says nowhere that you have to make mistakes yourself in order to learn from them, play it smart and learn from the mistakes of others
Recent Blogs