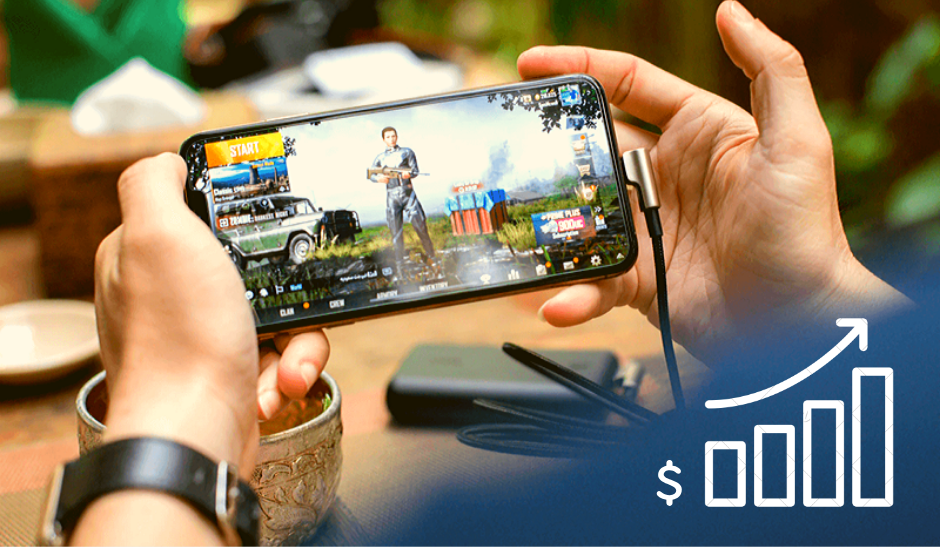 The mobile game industry has been going through a massive boom in the 21st century, thanks to the popularity of mobile phones and the rise of mobile game development companies.

It has become a popular medium for many businesses to earn profits, top of the line in which is Tencent Gaming, with a revenue of $4,641 million. Tencent overshadows behemoths like Microsoft, Apple, and Sony, with its game app PUBG mobile.

The question on everyone’s minds these days is how much money can an app make? Though that’s a topic we’ve discussed earlier, we’ve decided to narrow down our approach to an industry that is currently booming in the digital world and is expected to grow just as much in the coming years; the Gaming industry.

The History and Trends Of Game Apps, Their Revenue, & User Base

The mobile game industry has seen a significant boost from 2017- 2020. The overall revenue generated from mobile apps increased by 17.8%, going from $44.2 billion to approximately, $52.1 billion.

This steep rise of game app revenue is a direct consequence of the popularity of mobile devices, as they become a primary tool for entertainment for the masses.

User data from the past four years suggest a rise in-game app user population by 25.61%, moving from 1.2 billion users approximately to nearly 1.5 billion. The graph below exhibits that this population will continue to rise, which could help increase the revenue game apps generate. 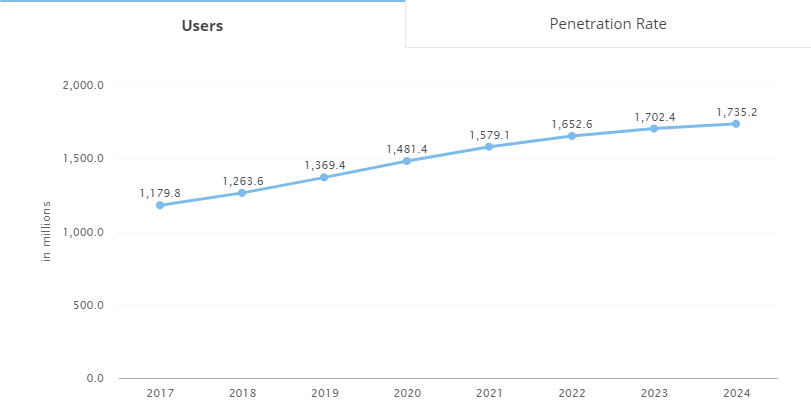 This shows that the younger generation, primarily millennials and Gen-Z, are the main reason behind this growth. As it stands, the answer to the question “How much can a game app make?” keeps on increasing in monetary value, with the passing of each year.

The year 2020 has been great so far for Tencent, the mobile game development company behind PUBG mobile and Honor of Kings, both of which occupy the top two spots in the list of top-earning games of 2020, across both, iOS and Android platforms.

PUBG mobile generated $151.3 million in revenue, while Honor of Kings made $151.3 million, marking a 25% year-over-year growth rate in comparison to January 2019.

The list of top-earning games in 2020 for January includes Candy Crush Saga, Lilith Games’ AFK Arena, and Supercell’s Clash of Clans, amongst many other names.

So what does that say about how much money game apps can make in 2020?

It largely depends on the kind of game app you develop, the target audience and the target market you acquire, and the store you target (assuming you don’t target both of them).

The biggest challenge that game apps face is becoming a top-grossing app, for which you should choose the best game app development company from the many mobile game companies that are active in the market.

But what makes these apps the biggest revenue generators in the industry?

Well, there are two big reasons:

So, how can game apps make money? First, the category their game is in has to be in demand. Action games and strategy games are one of the most popular on play stores, as you can see from the list above.

But more importantly, they have to target more than just established markets. Markets such as China or emerging markets in Asia are some of the hottest markets to acquire. In 2018, China was responsible for generating 40% of the entire global mobile game app revenue.

What this suggests is that mobile game apps are different from business apps. While business apps are more locally targeted, games have the potential of attracting a more global target audience. This means that in order to make money using mobile games, your game app has to cater to a broader target market.

This can be done through targeted marketing, making your app available in different languages, and setting up localized teams for separate regions to provide personalized gaming experiences based on the cultural and professional differences between different regions.

At the end of the day, the most basic business premise also applies to mobile game apps. The larger the target audience you acquire, the more money you can make from game apps in 2020.

The chart above is taken from App Annie’s state of mobile report of 2020. If you look at the highest consumer spending in China is for “game for peace.” It is the official version of PUBG mobile, designed specifically for the Chinese and Asian markets.

Now, if you scroll back up to check the list of the highest revenue generator in January 2020, you will find PUBG in the number 1 spot. These strategies are the key to making money from game apps.

Obviously, not everyone has an insane amount of capital required for such activities. But you can always start local and then expand internationally. The best thing about games is that they don’t go out of fashion as quickly as other mediums of entertainment.

You can watch a movie one time or two times, or if you love it maybe ten times. But the amount of times you play the games you like and the number of hours you dedicate to these games is most likely far more significant.

Mobile apps have immense potential to generate revenue, and for small game developers, if millions seem out of the question, think again.  Games such as Candy Crush are an inspiring story of how simple games can result in immense profitability if you can get the word out to enough people, and you can do it too.

There are two primary stores on which mobile games are downloaded, one is the Google Play Store, and the other is Apple’s App Store.

In 2019, both of them combined generated $61.7 billion in mobile game app revenue according to SensorTower’s data. Out of this, $37 billion came from the App Store, while $24.7 Billion was generated through Google Play Store.

What’s interesting about this is that according to App Annie’s State Of Mobile report of 2020, this figure is likely to exceed $100 billion in 2020.

If for reasons of capital limitation, you cannot invest in both the platforms, then based on the stats below, choosing iOS game app development seems like the better option. 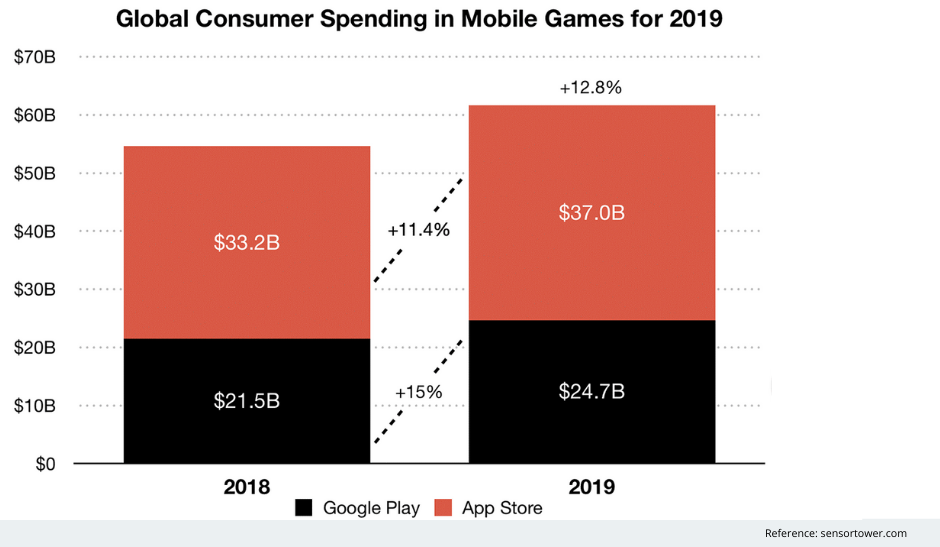 But one thing that you should take into account is the kind of games that are more popular on these platforms.

Again, take a look at the apps that are generating the most money and notice the difference in apps in the Android section and iOS section. Based on all of that, you can make an educated decision on which platform to develop your game app on for maximum revenue generation.

Based on our findings, what we conclude is that the answer to “how much money can a game app make in 2020” is dependent on multiple factors. These include: 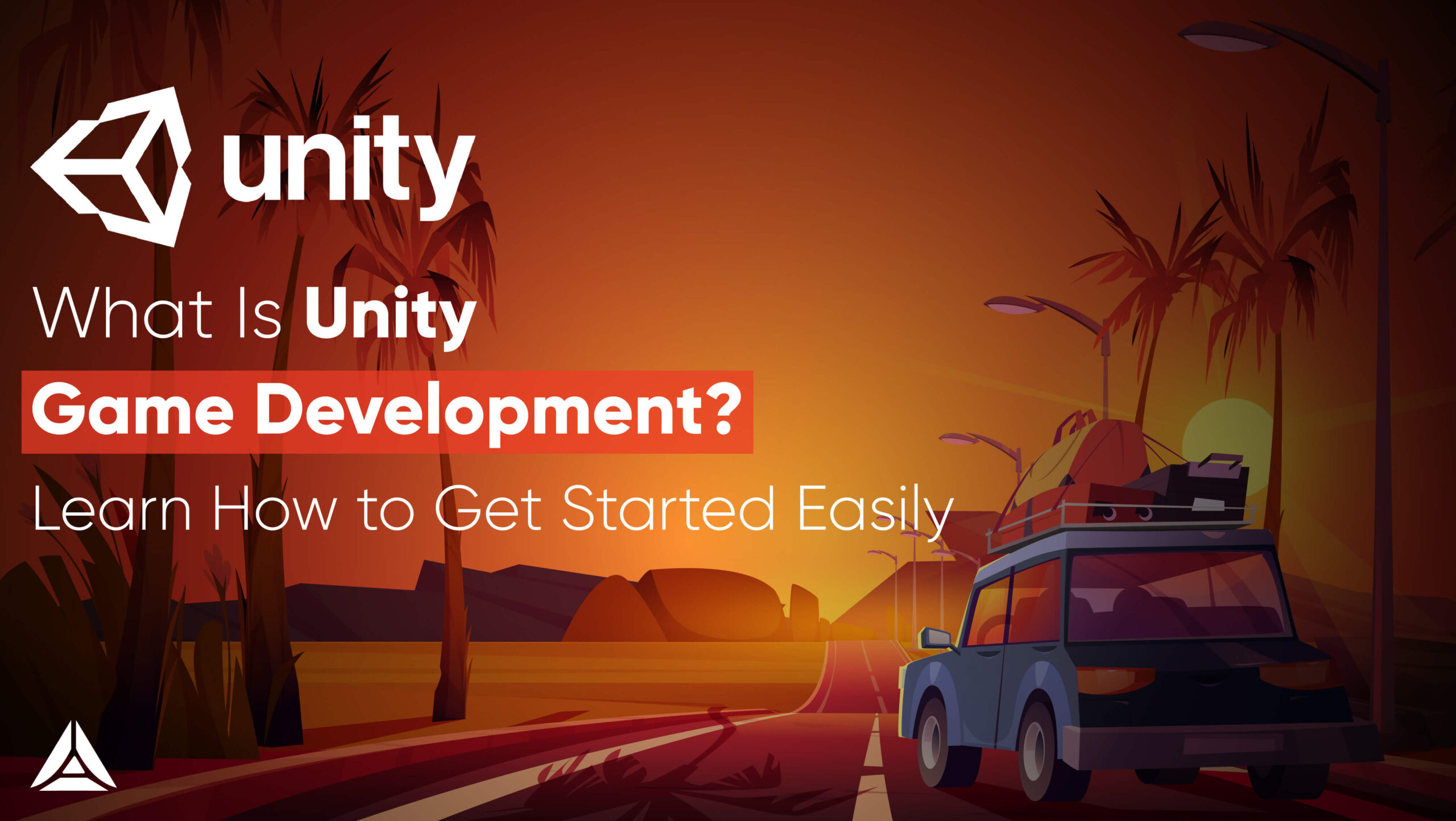 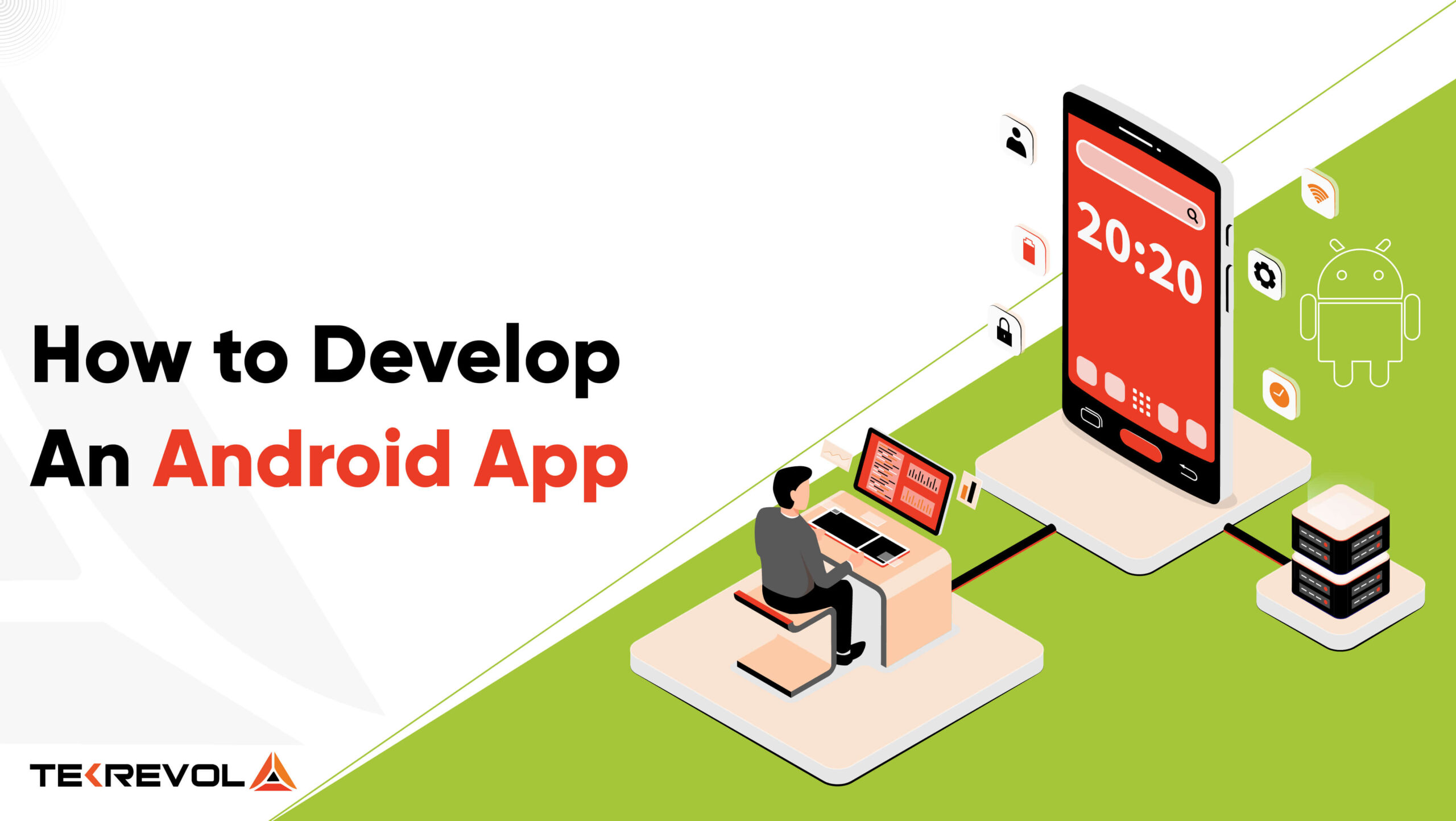 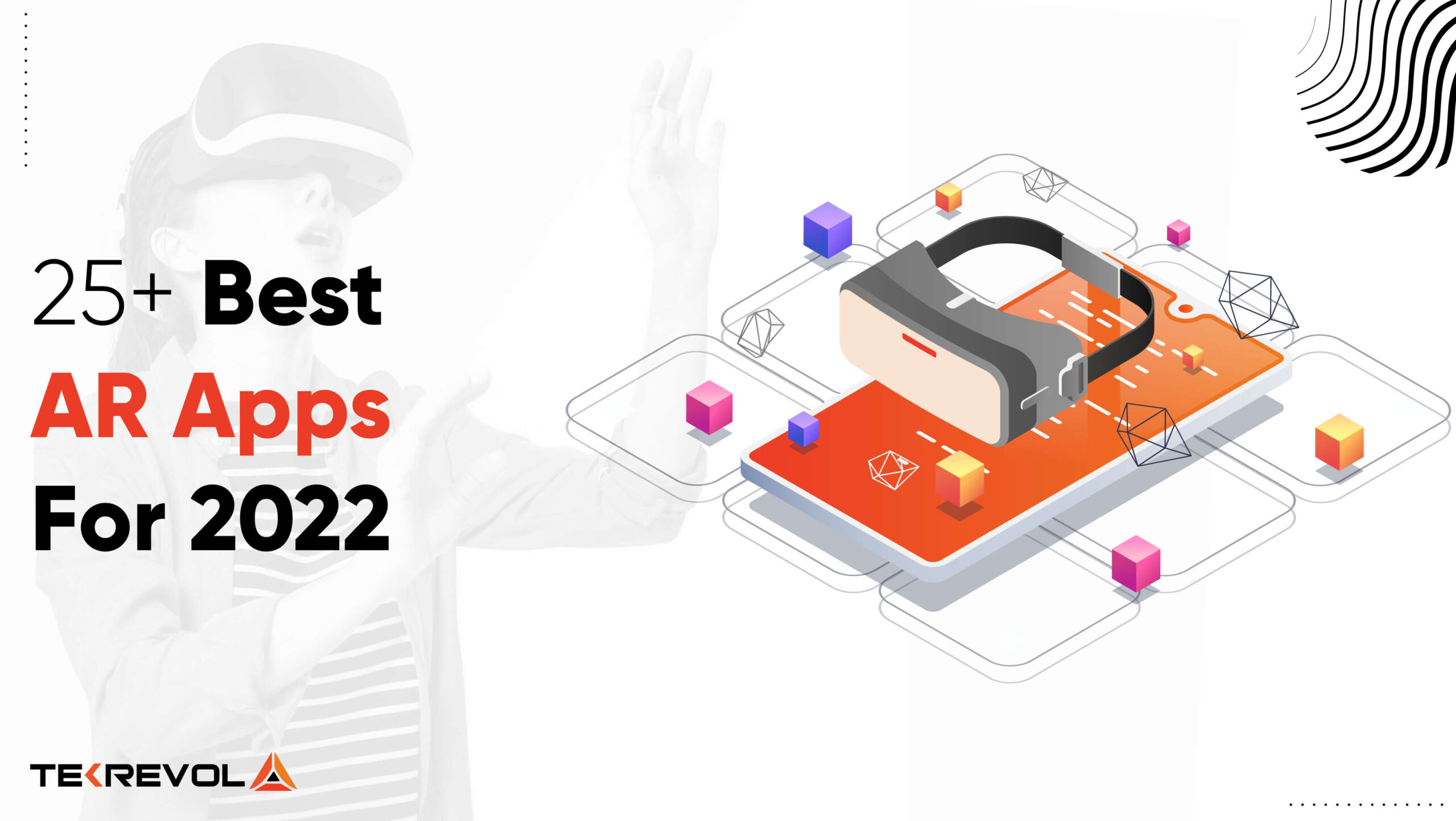